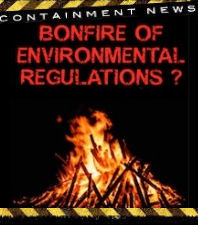 Posted at 15:04h in Uncategorized by admin

The full edition of July’s containment news is available here with all of the news, stories, and live links: *Containment News July 2016 PDF Version*

Whether you voted in or out, whether you are pessimistic or optimistic about the UK’s future outside the EU, there is a cloud of uncertainty hanging over all of us.  However, this enforced period of limbo does not have to pause action on improving our rivers and beaches, it therefore falls on all of us to ensure that Brexit negotiations are not used as an excuse to let environmental standards slip.  Environmental awareness has evolved beyond all recognition from the days when the UK was the ‘dirty man of Europe’ in the 1970’s but it’s still an area where the cost of avoidance is very often calculated before compliance.  More than 70 per cent of environmental safeguarding comes from European legislation so trying to rewrite everything would be costly, time consuming and almost certainly pointless. The only certain outcome would be a boost for legal firms’ earnings and a period of ambiguity which could be exploited by serial polluters who habitually put off taking preventative action while weighing remediation costs against the chances of being prosecuted.
The new Bathing Water Directive is much tougher to comply with than previous regulations, but when it comes to protecting the health of beach users and the environment it doesn’t make sense to waste time, money and resources rewriting something which works and that has significantly raised the bar for the level of ‘acceptable’ cleanliness.   Having a standard benchmark which allows UK beaches direct comparison with our European neighbours also makes perfect sense.

‘Red tape’ is only a problem if it is preventing the smooth and efficient execution of desired actions, the danger is that the term ‘red tape’ is very often attributed to costly, inconvenient or time consuming regulations that are otherwise perfectly valid.

It has been depressing that the environment has played virtually no part in pre or post referendum political debates, even though it’s the one thing that truly impacts every level of society without prejudice.  Pollution is pollution, nobody in their right mind cares if the filth that their children are swimming and paddling in at the beach is sovereign British sewage or EU regulated waste.

The prospect of having a ‘bonfire’ of environmental legislation and ‘watered down’ regulations under the cloak of ‘taking back control’ and ‘making our own laws’ is a very real danger and something which many environmental groups have voiced grave concerns about:

Greenpeace UK Executive Director John Sauven said: “Many of the laws that make our drinking and bathing water safe, our air cleaner, our fishing industry more sustainable and our climate safer now hang by a thread… There is a very real fear that Cameron’s successor will come from the school that supports a bonfire of anti-pollution protections.”

Surfers Against Sewage (SAS) CEO Hugo Tagholm said “With the uncertainty that #Brexit is causing we now need to question what UK government environmental policy will be moving forward in post-EU politics and how this will influence national environmental legislation. We must now mobilise grassroots support to ensure that the environment doesn’t fall to the bottom of the pile of new policy and legislative decisions.”

Friends of the Earth said the group could “no longer rely on the EU to protect our nature and habitats”, adding that clean beaches, air quality and bees were among the factors put at risk by potential loss of EU legislation. Protections for our birds and wildlife, our beaches and rivers, must not be sacrificed in the name of cutting away so-called EU ‘red tape’.”

Industry Trade Association British Water said the decision to leave the European Union is “certain to have a significant impact on a sector where considerable investment is driven by EU directives on water, wastewater and the environment”.

Friends of the Earth Scotland : Brexit poses “a huge challenge to decades of progress on improving the environment and tackling climate change”.

Scottish Environment Link, a forum of voluntary organisations, has stressed the importance of continuing to “respect the EU laws to which we remain bound”. They have warned that failure to do so could result in court action and damage EU relationships.

I would encourage all readers of Containment News to join Surfers Against Sewage in urging your MP to stand up for environmental legislation on your behalf.  Please contact your MP today, asking them to join Surfers Against Sewage’s All Party Parliamentary Group to help ensure the UK safeguards existing environmental legislation and strengthens it wherever possible to deliver more effective action to tackle marine litter, sewage pollution, climate change and inappropriate coastal developments. Our waves, oceans, beaches and wildlife depend on you!

Full details of how to take action can be found HERE