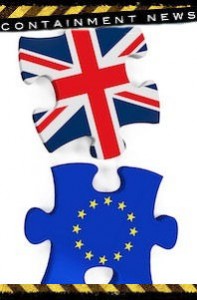 Posted at 14:29h in Uncategorized by admin

The full edition of June’s containment news is available here with all of the news, stories, and live links: *Containment News June 2016 PDF Version*

‘5% of UK beaches are poor quality, the highest percentage in the EU. The number rated as “excellent” quality has slumped by more than a fifth since last year‘

The positives and negatives of the past 43 years of Britain’s membership of the EU would take at least another 40 years to unravel, analyse and evaluate.  However, one area that I believe is hard to dispute is that the environment has benefited greatly from having a Europe-wide benchmark and an ‘outside’ wider perspective view on pollution.
When the UK joined the EU in 1973 it was widely referred to as the ‘dirty man of Europe’ due to its poor environmental record.  We’ve come a long way since then, almost 95% of UK beaches met at least sufficient standards of cleanliness in 2015, close to the EU average of 96%. I’m not suggesting that we would still be Europe’s ‘dirty man’ if we had not joined the EU, but I agree with the Environmental Audit Committee who concluded “the UK’s membership of the EU has ensured environmental action was taken on a faster timetable and more thoroughly than would otherwise have been the case”.  The turnaround started with the EU’s 1976 Bathing Water Directive (BWD) and has been strengthened with tougher stringent targets in recent years. The 2015 bathing season was the first time that all EU Member States monitored their bathing sites according to the provisions of the EU’s revised BWD 2006/7/EC. The Directive specifies that bathing water quality can be classified as ‘excellent’, ‘good’, ‘sufficient’ or ‘poor’ depending on the levels of faecal bacteria detected. Behind the positive there are negatives which prove that the UK still has a lot more to do, nearly 5% of UK beaches were judged as poor quality, the highest percentage in the EU, and the number rated as “excellent” quality has slumped by more than a fifth since last year.  According to an EU-wide report, 60% of UK rivers were rated as ‘excellent’ compared to an average of 84% across Europe.

Sadly it’s hard to see that there would not be a relaxing of the pollution regulations if the UK left the EU. This assumption is based on the abundance of evidence of successive Governments looking for loopholes, stalling and haggling over targets and compliance deadlines. And let us not forget that Defra was hit with the largest budget cuts of any UK government department last year*.   The recent “de-designation” of some poor quality UK beaches alone is evidence that avoidance is often chosen over compliance.  And having a bathing water season in itself is ridiculous, as it allows for the counting and disputing of sewage spills based on the time of year they occurred, as relevant to our precious environment as the meticulous analysis by TV football pundits of whether a foul was inside or outside the penalty area.
There are very few subjects that are agreed upon by all political parties and across all spectrums of society, one exception is the disgust over the pollution of our rivers, and beaches.  There are no organisations campaigning for dirtier water, Surfers In Favour of Sewage and the Royal Society for the Extinction of Birds have yet to be formed.
Friends of the Earth’s recent report “The Implications for UK Environmental Policy of a Vote to Exit the EU” concludes “for the sake of the health of UK citizens, the natural environment and British business interests, European Union membership remains Britain’s best option.”  About 80 per cent of UK legislation on environmental affairs comes from Brussels.

Nobody is claiming that the EU is perfect, however, when it comes to pollution the ability to make direct relevant comparisons with our neighbours across Europe who are all being tested on the same scale is a perfect way to maintain standards and strive to improve.
With MPs who believe passionately in independence trying to convince voters that ‘together we are stronger’ and ‘ex-pat’ MPs warning of the dangers of immigration, it’s little wonder that so many people are still confused and undecided.  However, the environmental improvements made since the 1970’s are proof that EU legislation can work, especially in areas where the desired goal is the same for all member countries.  Although I think it unlikely that the UK would return to being the ‘dirty man of Europe’, the frightening prospect is so depressing for future generations that it alone is enough to make me believe that we are better off remaining in the EU and continuing to work together to improve the air we breath and the water we drink.

In our modern evermore connected world we should take a lesson from nature and embrace interdependence rather than seek independence.