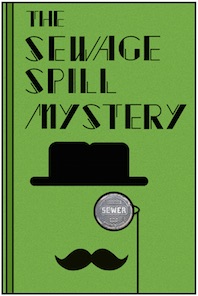 Posted at 11:00h in Uncategorized by admin

‘Beaches will be Closed!’

The clues are all there, and it isn’t going to take Hercule Poirot to piece together the evidence that 2015 is  going to be a watershed year for the UK water industry.  The much stricter new Bathing Water Directive comes  into full-force this year, meaning that we face the very real possibility that some of the UK’s most famous  beaches will be closed to bathers this Summer.

As we all know we now live in an extremely litigious world and compensation claims are already costing industry  billions every year.  Tourist dependent businesses from hotels to lilo sellers will unhesitatingly and ravenously  be looking for someone to blame when their year-on-year sales are down as a result of sewage polluted beach  closures.

As the Environment Agency found during the recent severe flooding, even legitimate excuses about funding  cuts etc. were of no relevance once the media began to play the blame game and politicians enthusiastically  used the tragedy as a way to score points.

The way that water companies record sewage spills is already being challenged and used against    them, Thames Water’s previous claims of a good spill safety record is now being quoted by Lord Berkeley to justify his legal challenge for the cancellation of the £4bn “Super Sewer” project.  Tireless environmental campaigners Surfers Against Sewage are also fighting for changes to the way sampling is conducted and for it not to be seasonally dependant.  Water companies celebrating the lack of spills in dry weather has about as much relevance as boasting about the lack of antifreeze pollution at airports during a heatwave.

In addition to this, Fish Legal is challenging the water and sewage companies at the Royal Courts of Justice to argue that the public should have a right under ‘freedom of information law’ to know about their activities that affect our environment.  It’s ironic to be requesting full transparency in the murky waters of CSO sewage spills, but this case may well prove to be just the tip of the fatberg when it comes to accountability.

Blanket coverage on the front pages of our newspapers and on every television news programme featuring images of tearful children who have had their annual seaside holiday ruined by sewage beach closures is a powerful and emotional message.   In the face of this coverage, excuses of cyclical spending restraints and budgetary limitations will appear cold and heartless and could promote the water companies to the new hate figures of society.  Even the most anti-capitalist of journalists are becoming a little jaded by banker-bashing and would surely welcome a new target for their vitriol.  Although everyone has their part to play in helping to prevent spills* the compensation buck will inevitably stop with the water companies themselves.  If it was a game of pollution Cluedo, the culprit would be the water company, with the sewage, at the beach!