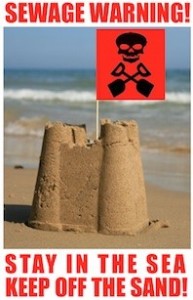 Posted at 10:25h in Uncategorized by admin

The full edition of August’s containment news is available here with all of the news, stories, and live links: *Containment News August 2015 PDF Version*

‘Sewage in the Sand’

One of the depressing things about researching stories for Containment News is the way it changes your perception on things, for example, when I hear the word ‘beach buggy’ I no longer think of the vehicle loved by Californian surfers I immediately get an image of a sewage related virus!

Thanks to over 6 years of editing this e-Newsletter I no longer view the sea as a welcoming place, more like a murky soup of waste.  However, as long as you stay on the beach you can still have an idyllic summer holiday.  But tragically that is now another perception that has been sullied, thanks to a story getting a lot of coverage in the American media, but as far as I can discover has not yet hit the European news radar.   A recent report in the American Chemical Society Journal Environmental Science and Technology has highlighted the shocking findings that faecal bacteria in beach sand is at levels 10 to 100 times higher than the readings found in nearby seawater.  Naturally ‘the beach’ is a term which encompasses the sea and the sand, and yet sewage pollution monitoring has almost exclusively been confined to testing the sea.

The new research by Dr. Tao Yan and his team from the Department of Civil and Environmental Engineering at the University of Hawaii has concluded that faecal matter decays much slower in beach sand than in seawater “wastewater bacteria can easily become embedded in “biofilms” within sand that “provide shelter” to bacteria.  Sunlight can also deter bacteria growth, the scientists said, and sand provides these germs with some cover from sunlight, whereas shallow seawater does not.   Dr.Yan said “wastewater-contaminated marine beach sand may act as a chronic source of wastewater bacteria to the beach seawater”.

Hopefully this research will trigger a rethink in the way coastal pollution monitoring is conducted and as much attention will be paid to the sand as the sea, it may well give a much clearer picture of the long term impact of sewage pollution in a similar way that hair samples give a far more accurate history of drug abuse than a urine sample.   Testing the sand could also compensate for the ridiculous practice of only monitoring the sea during the “bathing water season”* something which quite rightly infuriates surfers and other recreational water users who share the sea with the UK’s 31,000 combined sewage overflows (CSO’s) all year round.  Forty beaches in Devon and Cornwall were polluted with raw sewage in a single July weekend recently, how long will that filth remain in the unmonitored polluted sand?

Sadly thanks to this research, the idea of children happily playing in the sand with their buckets and spades is yet another tainted image and I will view it as yet another way for them to catch a beach buggy.