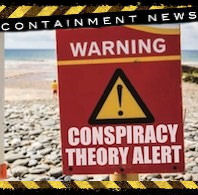 Posted at 10:12h in Uncategorized by admin

The full edition of March’s containment news is available here with all of the news, stories, and live links: *Containment News May 2016 PDF Version*

“The bathing water season starts on the 15th May, so if you have been using our coastal waters since the 1st October 2015, statistically you’ve not really been there.”

Maybe it’s my age, maybe it’s because I’ve been editing Containment News for 7 years, or maybe I’ve just read too many John Le Carré novels, when I hear about the ‘de-designation’ of bathing waters I smell something fishy (or sewagey).  Successive governments have dedicated massive resources and time to the reclassification of things in order to improve statistics.  If as much energy was focused on solving the core problems as there is to how the problems are statistically reported the country would undoubtedly be in far better shape.
When it comes to pollution you would think that things were simple and clear-cut, a beach which is found to be contaminated with untreated sewage is a polluted beach.

However, it appears for some unfathomable reason that the number of people actually using the beach has to be factored in, surely the beach is still a pollution problem whether it’s being used by thousands of holidaymakers or one man and his dog.

Earlier this year Staithes, Newhaven and Lyme Regis Church were all de-designated as bathing waters by the government, Staithes and Lyme Regis Church were both classified as having poor water quality.  Defra are currently consulting on whether to remove Silloth from the list of bathing waters and the sea off one of David Cameron’s favourite holiday spots, Rock, in Cornwall, is set to be among waters removed from the list of official bathing waters. The “de-designation” will mean the waters no longer need to be tested and swimmers will not be warned if the quality is poor.

The Sunday Times recently reported that “ministers are being accused of “washing their hands” over the problem of dirty and polluted seas“. Kerry McCarthy, the Shadow Environment Secretary said “Tory ministers are ducking their duty to ensure Britain’s bathing waters meet new EU standards designed to protect the public”.

The EU Bathing Water Directive is very clear, its aim is to “protect human health and the environment” the waters are “classified according to their level of quality: poor, sufficient, good or excellent, linked to clear numerical quality standards for bacteriological quality”.

You can apply for a bathing water to be de-designated if one of the following applies: 1: There is evidence that the site is no longer used for bathing. 2: The local authority or beach owner is working to deter bathing for safety reasons.  Although it’s made clear that “application will be rejected if it’s based on poor water quality” this simply puts the focus on trying to prove that a beach is not statistically popular and does not “attract a number of bathers proportionate to its size”.

As soon as you make pollution a matter of statistical relevance rather than a simple crime against the environment it opens up the possibility for loopholes (surveying during low tide) and numerical haggling over how many beach users qualifies as “significant”.

Taking this to a ridiculous extreme, if Blackpool beach became so contaminated with untreated sewage that holidaymakers stopped using it then presumably there would be a strong case for it to be ‘de-designated’ as bathing water.

The bathing water season starts on the 15th May, so if you have been using our coastal waters since the 1st October 2015, statistically you’ve not really been there.

The simple fact is that our bathing waters should be monitored all year round and that incidents of pollution require investigation and prosecution regardless of how much wildlife or how many bathers are directly affected.