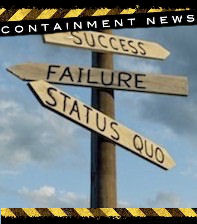 Posted at 12:42h in Uncategorized by admin

The full edition of February’s containment news is available here with all of the news, stories, and live links: *Containment News February 2016 PDF Version*

There has been a very significant increase recently in the size of fines being handed out in England to water companies for sewage pollution incidents.  Thames Water was hit with a record breaking £1million fine in January after toxic sewage waste leaked into the Grand Union Canal in Buckinghamshire over a nine-month period between July 2012 and April 2013. In his summing up, the sentencing judge said that  “the time has now come for the courts to make clear that very large organisations such as [Thames Water] really must bring about the reforms and improvements for which they say they are striving because if they do not the sentences passed upon them for environmental offences will be sufficiently severe to have a significant impact on their finances.”  In the same month Yorkshire Water was slapped with a £600,000 fine for a sewage leak which killed 860 fish in a nature park in Wakefield.

To put the size of these fines in context, compare them with the fines handed down to companies and individuals in the last financial year by cases brought to court by the Scottish Environment Protection Agency (SEPA): they totalled £284,400 and that was a record, the highest combined amount in the last 5 years.  In previous years average fines for UK utility companies have tended to be between £5,000 and £10,000, and it’s very rare to see a fine higher than £500 for pollution prosecutions in Northern Ireland.

Unless the punishment fits the crime and is proportionally related to the offenders’ wealth there is a  reprehensible opportunity to take gambles with the cost of rectifying potential problems against the projected cost of an incident.  An extreme infamous example was uncovered in the car industry, where it was found that the cost of recalling and fixing a known mechanical problem was weighed against a projection of the estimated cost of lawsuits from accidents caused by the defect.

This long overdue, and hopefully sustained change in the severity of fines should be prompting a less miserly approach by the water companies to putting their infrastructure in order.  To coincide with this apparently tougher stance on pollution fines it would make perfect sense to reform the ridiculous practice of only monitoring coastal pollution between May and September.  The very existence of a bathing water “season” implies that by definition, there are 7 months of the year when polluting the sea with untreated sewage is not really such a problem. This assumption is further strengthened by the recent de-designation of a polluted Yorkshire beach as ‘bathing water’ because a controversial survey indicated “low user numbers” (2,484 going in the sea for a paddle and a further 276 swimming).  A recent study concluded that “most rivers, lakes, coastal and ground waters in England will still not meet legally binding EU water pollution targets by 2021”.

It’s worth remembering that pollution incidents are not confined to calculated negligence, carelessness, or bad H&S procedures, they can be triggered by fire, mechanical failure, vandalism or acts of terrorism via explosives or cyber attack.

Hopefully the media coverage of these fines will make companies of all sizes review their vulnerabilities and instigate the ‘stitch in time saves nine’ principle, and at the same time employ due diligence with regard to their environmental insurance cover.  A company’s spill and firewater incident contingency plans should be as important an element of it’s annual review as it’s projected sales figures.  A polluting company’s reputation can take even longer to recover than the natural environment they have contaminated.